How can we help you today?

Solution home dotPhoto - the wholesale club for printing & sharing dotPhoto FAQs: how to do almost anything at dotPhoto

How can I print images from a video? Print

dotphoto uploads short videos from your phone or computer. Videos don't print, but these techniques will help you turn videos into images that can be printed:

Four ways to take a ‘screen capture’ from a video

2) Extracting a still frame from video in Apple iMovie

a) Let the pointer hover over the video frame that you want to extract as a still image.

b) Hold down the Control key and press the mouse button to open the menu, and then choose “Add still frame to project.”

d) To change the duration, click the Duration button (looks like a clock) that appears in the clip’slower-left corner when the pointer moves over the clip; enter a time for the Duration, and click OK.

a) Open the video in QuickTime Player, and pause the video at the desired position.

b) Go to File menu and select Export.

d) Choose location to save to and click Save.

You can take a picture of what is on your screen by pressing PRINT SCREEN (PRTSC or PRTSCN on some keyboards). This is called a screen capture. Paste the screen capture into a document, e-mail message, or other file. There are two types of screen captures: the entire screen or just the active window. For example, if you have three programs open at the same time, you might want a screen capture of only the active window. Note:Some keyboards or mobile PCs that don't have the PRINT SCREEN button might use other keyboard combinations, such as FN+INSERT, to take a screen capture. Check the information that came with your computer or the manufacturer's website for more information. To copy the entire screen:

NOTE: dotphoto does not up-size photos because we would end up printing a lot of blurry photos and people would be angry. However, you can, within reason, up-size some photos if you understand that "up-sizing" does not add image data where none existed: you get an approximation, but not a photo that is as clear as a photo taken with a high resolution camera, which includes many camera phones today.

Small photos will print poorly or generate error messages when printing, so you can "up-size" a photo with some external software. Irfanview is a free and high-powered editor.

Paste your screen capture into Infranview, and choose Image, then Resize/Resample, and set your photo to 4000 dots on the longest side. (dotphoto accepts images up to 6000x6000). Save your up-sized photo and upload it to your dotphoto account for printing. 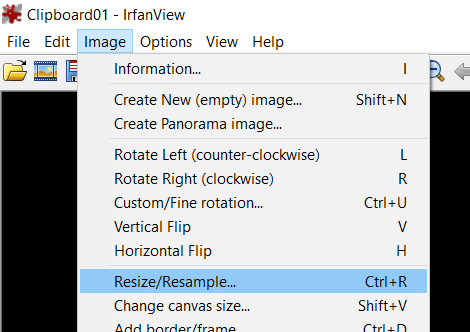 Write us at videoprint@dotphoto.com and tell us which video you'd like to turn into a print. We'll add it to your cart.

Did you find it helpful? Yes No

Send feedback
Sorry we couldn't be helpful. Help us improve this article with your feedback.